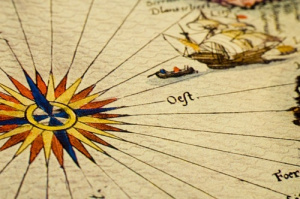 A slow morning in that I detailed the compass in pencil and then after some more research wondered whether a bigger compass without a case (like they used to have on old maps) would look better (see picture below),

so I rubbed out the one I had drawn and then instantly regretted it because I remembered why I had done it that way in the first place and having considered it, thought the other alternative would be too much and look cluttered. You see originally I wanted to include navagational instruments used by the team and so it had to be a hand held compass of that era to fit in with the sextant and the chromometer, not only that I had positioned it there and had wanted a round face to balance circular face of the chronometer on the left of the picture. Consequently I had to redraw, but it worked in my favour eventually because I repositioned it and moved it back so that sat fully outside the map circle. The compass was rather difficult because it at an angle and so I couldn’t use a compass to draw the circles, they are all freehand.

One of the things I should also mention is that as an artist who mostly works on imaginary things I always have to decide where the light source is coming from first and imagine where the shadows and light will be. Observational drawing however shows you where the light comes from (this can be problematic if you use the sun as your light source because it moves and that is why a north facing studio is best). In this piece it is a mix of factual and fictional elements. I have several objects and creatures (plus of course the sea and the rope) and they all must have the same directional light to make it cohesive as a whole picture. My light source is coming from the left, it often does because I am left handed, in this case though I had to decide east or west rather than left or right. So even if I copy a particular photograph for the map, I have to change the shadows and light to fit into the predominant light source and use my imagination as to where the light will sit. 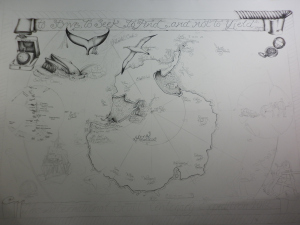 I have uploaded a picture of the compass which I have been fiddling with now since 10am and it is now 3.47! So coffee break and some more rope tonight!

Tomorrow, I will be tackling the small map that I have done of the doomed expedition and also the pony.

Please feel free to send me your comments and questions, I would be happy to hear from you.