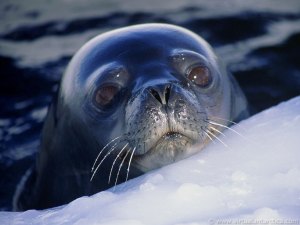 Weddell Seals and Killer Whales today.  I wanted to put the seal near the Weddell sea, plus I wanted it on ice as from my research I found there was sea ice around the Weddell Sea. 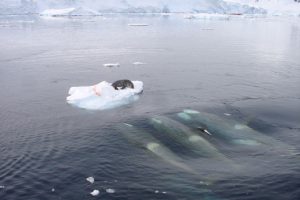 Initially I was going to have the whales hunting and creating a huge wave which they do to dislodge the seal, however when I looked at the composition as a whole I thought it was too much and I wanted to balance the vertical lines of the ship in the lower left hand corner and also invert the shape of the diving penguins at the bottom right hand corner. Additionally,  I recall watching an episode of Frozen Planet on the BBC (my favourite show at the moment) where the whales rose to look at the camera men, I believe this is the image they have used on front of the book. I loved that image and decided it encapsulated  the character of the whales  so well. Plus it was my tip of the hat to those brave cameramen and their skill. 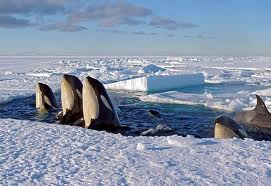 whales ‘eyeing’ their prey
I spent time this morning researching whales and could I find a close up of their eyes? No.
Then I researched Weddell seals. Did you know they have no external ears?
I looked at old drawings …

I studied their shape and character.

Then I came across a photo at the Scott Polar Institute of a Weddell seal which I liked the shape of, but it was facing the wrong way. So I drew it the other way round and had to add detail from other pictures because there were none that were positioned like this to copy. 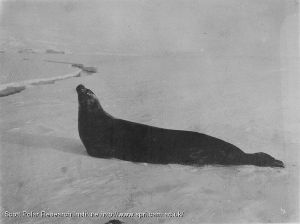 I wanted the seal more to the right than it is because of the whales’ eye-line but for aesthetic reasons this was not feasible.

You may be wondering why I haven’t started the sea yet, The reason for this is I need to see how all the creatures affect the water around them in order to join the oceans and seas up. Not only that, I don’t want to be leaning over it as I work and  marking it at all. So the sea will be one of the last things I do.

Tomorrow the ice, penguins and a sextant, and more rope!