Apologises for it being so late for the post, but I have only just finished for the day and it is 11.20pm. Began by detailing the journey to the south pole and investigating a variety of sources and dates. Looked at the mountain ranges and  used the  details on the ones below as a guide. 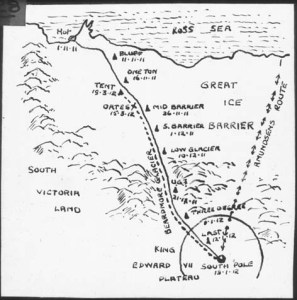 I liked the one below but it only showed Amundsen’s route. 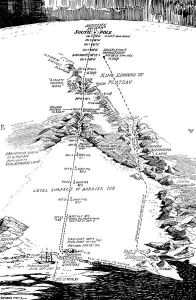 so I improvised and merged the two in my own style.

Then I  added some detailing to the parchment.

I began work on the Terra Nova. For technological reasons, Ponting only took a picture of the Terra Nova when it was ice bound and so I am aware that the masts are probably not correct for it to be at sail, however, there were no photographs of the Terra Nova in full sail and so I had no choice.  Moreover, the picture faced the wrong direction and so I have had to draw it in reverse!

The rigging was difficult but I managed, I think, to capture the essence of the Terra Nova in my own style and facing the direction I needed.

You will also see that I completed the Adelie Penguin and the pebbles for its nest too. Tomorrow  divider and ISCE logo. I am simply itching to get started on the colour now but know I have to be patient. Lots of rope and sea to do first! If you double click on the pictures then they enlarge.