I began by  doing the scale this morning. My scale is approximate because I don’t claim to be  a cartographer, nor is this a gegraphical or survey map, it is art work. I have been as accurate as art allows. I added the scale  next to the penguin. This scale design I took from a map of Abraham Ortelius in 1570. He produced many fantastic maps with strange sea creatures in them and I suggest if you like these maps, his work is well worth a look. I wanted to include something from  this era as it was then that  these beautiful maps containing strange creatures that no one yet knew much about emerged. It was a time of discovery and of wonder. It was these maps that were my inspiration behind the style of this map, which I wanted to bring up to date with the scientific knowledge of the creatures that expeditions such as Scott’s provided us with.  Plus, it may have been such maps that inspired people such as Captain Cook in 1773 to venture into these waters.

This map however is of Iceland, although Ortelius produced a huge range of maps of different areas. This is one of my favourites though. 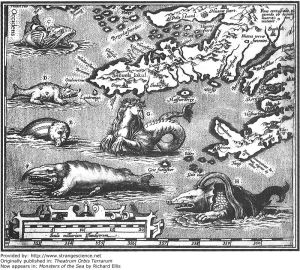 You will also notice (those keen eyed among you) that I  have muddled the measurements, this is deliberate. I wanted a  measurement of today  – metric  ‘centimetres’, combined with an older measurement which of course we still use occasionally,  imperial ‘miles’ defined in the British Weights and Measures Act of 1824, rather than kilometres or meters which is now the official system of measurement and used in almost every country in the world. Britain did not officially begin to use metric until after 1973.  I felt  merging the two reflected the past and present and this coupled with the 1570 scale equipment  allowed me to also include an  even older map measurement system and  heritage. 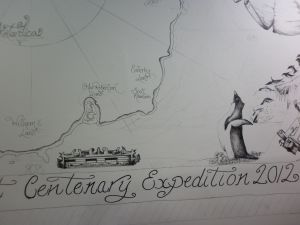 Then I proceeded to shade in the divider, which is an old wooden and slightly worn Edwardian divider.

The ISCE logo was next and the small emperor penguin within the logo.  I have not yet decided whether to  keep it black or add some navy blue to it. Their usual logo colour is blue. I need to wait and see at the end how the rest of the colours work with it. But I would like to stay true to their usual colour.

I then outlined the bottom scroll and inked the  words at the bottom before then going over the top words as well so then they matched. 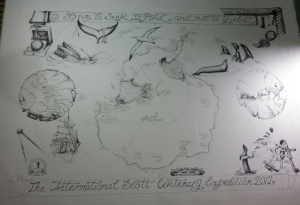 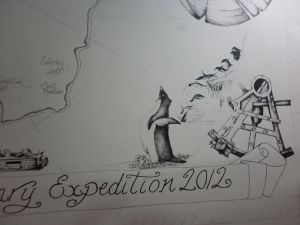 I have included the penguin so you can see the pebble nest from yesterday. Tonight I will be continuing the rope at the top. Tomorrow I will tackle the Southern Ocean.