Water water everywhere and not a drop to drink!

The Southern Ocean beckoned and I fought valiantly with my little ink pen.

I had studied numerous ink drawings of the sea, from Dores’ illustrations of the Ancient Mariner,

and of course Ortelius.

This looks like an Ortelius creature and sea but I couldn’t verify it.

I have experimented over the last three weeks in my spare time! And decided I wanted to create my own version. I couldn’t replicate the old techniques of the above artists  because all their work was done on wood block and so was etched in reverse for printing.

They would have  etched what they wanted white and highlighted, whereas I have to  do the reverse and use black for shadow and leave the white. This means I can’t simply go back and add highlights at the end which  they could and so can oil and acrylic painters. Working in ink you have to decide where you want your highlights and try to leave them blank and work from darker tones upwards.

Another  challenge for me was the edge of the sea. Originally, I thought I would have the waves crashing back as though they were trapped in the picture, but then I had a brain wave. I was worried that it would look like a swimming pool and as I began to draw the sea, I realised that just as I had used a crease of the paper circle to imitate  a mountain range in the detailed map, I could imitate waves and make them into paper, thus replicating the other two circles and also this would  symbolise the old explorers who thought the world was flat and the edge of the map was the edge of the world and it also  demonstrates that all of this is on paper, the entire scene is  pen and paper. 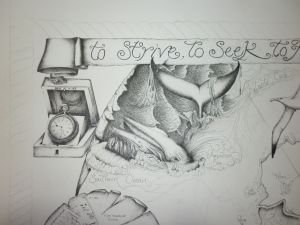 I liked that and so went with it. I hope you like it. I have quite a few changes to make yet around the front of the whale and the words. I had to have it dark there because of the paper circle. But hopefully you will get the idea. 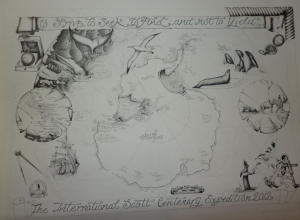