Day 19 picture is at the end of this blog.

I twisted some more rope down the right hand side whilst I mused over a dilema: what are the currents and winds like around Antarctica and how would that affect the waves and their direction? I had tried in vain to get a decent ariel view of Antarctica, but  all I managed to find was a satellite view which did not show the waves and also a few taken from planes as they crossed the Southern Ocean. I looked at the Shetland Isles and Orkney but again nothing to  help me. So as I wondered I drew rope. 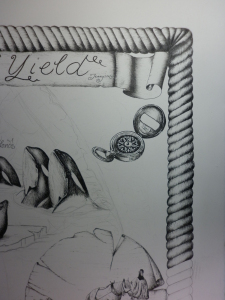 I also added a few touches to the sea around the whale as his body mass would have a direct affect on the waves around him. I experimented with pencil trying to get a flow of the waves but wasn’t satisfied.

You see part of the challenge is this, not only do I want to be true to the region and reflect its nature with the oceans and seas, but I have to consider the asthetics. If I had waves crashing into one another everywhere it would look too complicated and busy and I have to be mindful of that at this stage as there is already so much going on in the picture. Moreover, I also have to take into account the   picture as a whole and the  water and ice around Antarctica will create a pattern of its own which if I am not careful would dominate in the wrong way instead of enriching the  art work. Furthermore, I have the creatures and how they sit in the water and also the Terra Nova and whether I have her ice bound as her masts might suggest or at sea under steam. Tricky. So more research tonight.

Mark Reynolds  from the ISCE sent me a useful link on the currents around  Antarctica and so I will investigate them further and blog about it tomorrow.

Here is the picture at the end of day 19…well I might do a bit more rope tonight.