Not a full day back but  managed a few hours today.

Complicated isn’t it? The Polar Current  close to the land mass and ice goes in the opposite direction to the Antarctic Front. 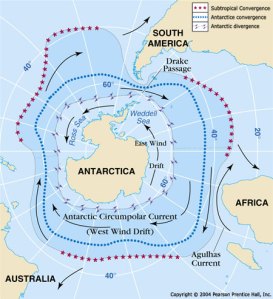 There is an East Wind drift across the Weddell Sea and a West Wind Drift in the other direction. 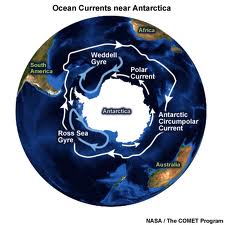 ‘Driven by forces such as wind, tides, and gravity, currents keep our oceans in constant motion. Currents move large amounts of water great distances. Countless currents have been named, but the seven major ones are the West Wind Drift (or the Antarctic Circumpolar Current), East Wind Drift, the North and South Equatorial currents, the Peru Current, the Kuroshio Current and the Gulf Stream. These currents flow in large rotating loops called gyres. In the Northern Hemisphere, gyres spin in a clockwise direction, and in the Southern Hemisphere, gyres spin in a counterclockwise direction. This is because of Earth’s spinning rotation and is called the Coriolis Effect.’ from Science and Technology focus at

Due to the earths rotation and the prevailing weather conditions in these southern regions, this ocean has developed over millions of years a current flow which is predominantly from west to east. This strong current was first reported by James Cook during his voyages of exploration in 1775. Sailors have repeatedly found that the Southern Ocean was a unique but hostile environment with continuous storm-force westerly winds, mountainous seas, huge expanses of ice and icebergs.’

I have the Southern Ocean going West to East however I now have to consider the  Ross  gyre and the Weddell gyre and  the Antarctic  Front and decide what is best artistically. 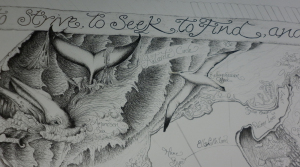 I am working on a draft version tonight to join them up and consider direction, before I commit it to  the original.

The water around the seal and the whales had to be calmer and  on photographs that side of Antarctica the water is calmer. I am considering how to alter the perspective from the pancake ice I have in the Weddell sea to  pack ice and ice bergs and then sea, I want it to look strange but believable.

This picture of the Antarctic and her clouds has  been influential  as the pattern is beautiful and I want to use the seas to create movement and pattern.

I have also been studying icebergs but I will share that with you tomorrow. I have to say they are simply stunning .

This is the map end of day 22. I am off to draft the seas and ice now. 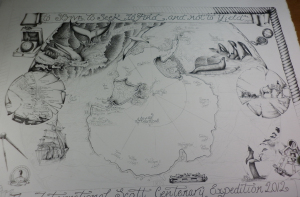