The map was due to be auctioned today: the 3rd of December at a dinner at the Painted Hall in Greenwich. However, on Tuesday last week, the ISCE informed me that they felt the map warranted an auction of its own and that auctioning it at the Painted Hall would mean that some people who might want to bid would not be able to. Therefore, to enable more interested parties to have the opportunity to own the map, my deadline was extended. Phew! 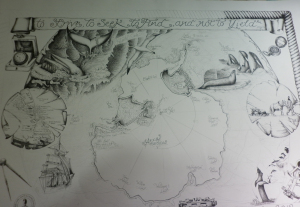 For the keen eyed among you, you will have notice that nothing has altered since yesterday. It is not because I haven’t been working on it. Nor have I given you what I promised… icebergs. I do apologise. My mind has been taken up with pattern as I will explain.

The deadline extension has enabled me to slow down my pace. On some days in the past I have worked a 12 hour day. Now however, in slowing down, it means that I can have more thinking time. So although it looks as though I have done nothing today. I have been planning and thinking.

When looking at the overall picture, we have to consider how it will look from a distance and it has to maintain a narrative and coherence as a whole. I was faced with a dilemma of numerous conflicting currents in the oceans and seas (as I blogged yesterday) and within that I had to think of the objects and creatures, the place names and the picture as a whole. Generally, I can see the picture in my mind’s eye and can hold the image of how I know it will look when it is completed. Other times, the picture is more organic and grows as you work and this can mean you have to stop and reconsider your overall picture. This map has been a mixture of the two. 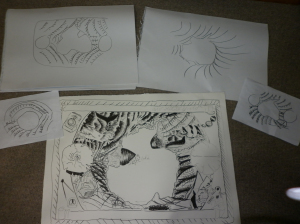 Over the last two days I had to give myself space to consider the seas and oceans but I also allowed the water to emerge from around the whales and the seal. What you see in the photograph above is my thinking. They are rough drawings of the bigger patterns of the waves and how I have to picture them.

Hopefully you can see what a difference the wave patterns make on the whole of the picture.

The picture above I did to experiment . I wanted to look at the light and dark areas in combination with patterns of the waves. Those illustrators who use Adobe photoshop and Illustrator can do this and experiment and then decide without committing. When working traditionally and in ink, you need to see it in your mind’s eye and if you’re not too sure then you have to try it out and experiment on a rough because when working in ink, I can’t change my mind half way through! And so, this is what I have been doing this afternoon- thinking and planning.

I now feel confident about the lines, shapes and shading and how it will knit together.

Tomorrow, now that my dilemma is over, I will be looking at icebergs and sea ice as well as continuing with the seas and oceans…I promise.