Hello! Three days off, I bet you thought I had got another cold or given up. No, personal circumstances that’s all. However, I have still been working on the map, just researching and thinking and sketching.

You may recall that I said I was considering changing the waves into clouds to  give another perspective. I was thinking about changing from  the eye line  of the seal to the bottom and the horizon with the penguins and the Terra Nova on the left hand side. Putting waves at the tip of the iceberg would not work because that should obviously  be sky.   Well, I researched illusion art. This was my inspiration behind the idea. This picture here…

Deciding I needed to look into this further I  Googled illusion art and here are some of what I found relating to  sea and sky. 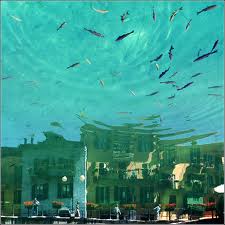 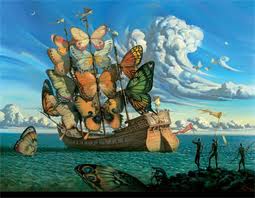 And another I found 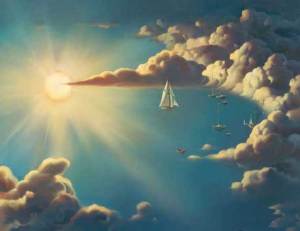 So, I then began to research clouds. Clouds in general and clouds that look like waves.

Nothing is ever simple in the Antarctic though. Did you know they have cloud patterns  that other places don’t have? Oh yes…

The colours are stunning and the shapes  mind blowing, but none of them fitted into my picture. I needed the  light to still come from the left and I needed  the shape to be easily manipulated into sea.

However, the biggest challenge was  the direction of the shading. I could not have a vertical shading of the waves that suddenly went horizontal for the sky and so I had to work out a way of doing this. Two days I thought about it and looked at clouds and waves and my picture.  The other  consideration was the rest of the waves and how they would fit in if I had to alter the style of wave.

So I did some very rough sketches as I was thinking:

Then I  began on the map. Nothing is ever easy… I found the rhythm of the waves around the seal didn’t want to  fall back into line with the Southern ocean waves and so I let them develop because it would have looked forced if I had tried to realign them and anyway the sea in that area has the drift and I didn’t mind. Then I  began to manipulate the waves a little  to mimic clouds. I added the outline of another iceberg as I wanted the same amount of dark sea on either side of Antarctica.

I like the darkness and  also the wave formations and  I will need to go back over the rest of the ocean and darken it and add this style to places to make it even, but I’m fine with that because it makes  everything else stand out, particularly Antarctica itself.

I will be reworking this area tonight. Already though I will have done  10 hours- so maybe just two more?